In the ’50s and ’60s, a Catholic who committed suicide is not allowed to be blessed inside the Church before burial. It was believed during this period that suicide is a great sin and a violation of God’s  greatest commandment to love one’s self before loving others: “Love your neighbor as you love yourself.”

But with the advent of the social sciences and psychological research studies, the Church started to relax its conservative stance against suicide. Moral theologians and the Church hierarchy began to realize that persons who commit suicide are actually very lonely people who need love. sympathy, and immediate help from others for their problems instead of public condemnation. People who are about to commit suicide are extremely lonely and depressed individuals, as well as pressured by their personal, family, or business problems. There is a higher degree of “unfreedom” felt by people who commit suicide because of the extreme social detachment they experience in life.

The French sociologist Emile Durkheim has an interesting theory on why people commit suicide—the social integration theory. This theory sees the connection between social integration and the risk of suicide. It simply states that people who are socially attached to their social groups are less likely to commit suicide than those who are detached from their own groups in society. Those who lack social bonding with their own families, friends, and relatives are prone to commit egoistic suicide when they encounter serious problem or crisis in life. Social detachment denies people of communal support which is necessary for the helpless to overcome loneliness and the risk of self-destruction. 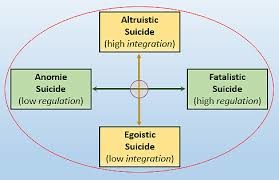 Depression may be the proximate cause of suicide but the ultimate cause is the loss of communal bonding and support. Extreme depression is the result of social isolation and detachment from one’s social group. Serious personal trouble can be bearable if one has a supportive family and group of friends who are willing to empathize and extend various forms of assistance to a lonely celebrity.

The following creepy suicide notes compiled by a psychiatrist reveals the serious problems and loneliness of people who are about to commit suicide:

2. “My mind–always warped and twisted–has reached the point where I can wait no longer–I don’t dare wait longer–until there is the final twist and it snaps and I spend the rest of my life in some state-run snake pit. I’ve lived for 47 years–there aren’t 47 days I would live over again if I could avoid it. I am going out–and I hope it is out. Imagine God playing a dirty trick on me like another life! Will you see Valerie through college–she is the only one about whom I am concerned as this .38 whispers in my ear.”

3. “Excuse the blood, but I have slit my wrists and neck. No one will understand the reason for this, anyway. To give some semblance of an explanation, I’m not a human, this is just a dream and soon I will awake. It was too cold and the blood was coagulating all the time, plus my new knife is too dull. If I don’t succeed dying to the knife I will blow all the shit out of my skull.”